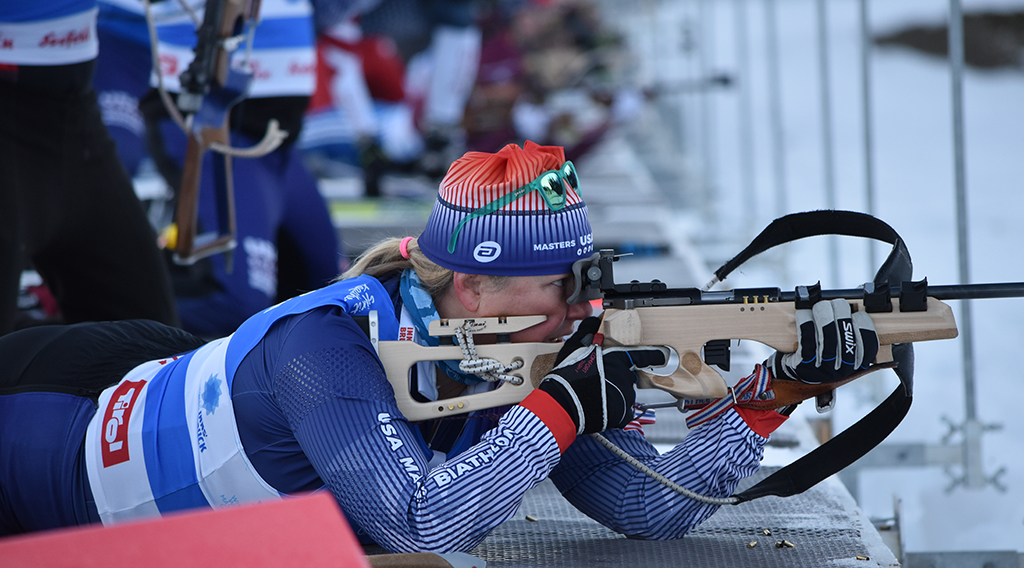 
By Ali Dickson | Photos Courtesy of the Biathamoms

The Tahoe Donner Cross Country Ski Center has inspired and stoked skiers of all levels, from beginners to gold medal athletes. Jen Lang-Ree and Elizabeth “Buff” Wendt have been longtime residents of Tahoe Donner and members of the Auburn Ski Club. On January 17, with teammate Kim Harris, their women’s biathlon team, The Biathamoms, took gold in the relay at the Winter World Masters Games in Austria.

THE MAKING OF MEDALISTS

The Biathamoms consist of a close community of women who are either mothers themselves or figures within their community. The group has been training at the Auburn Ski Club for several years. Their name came to be when then-coach and TDXC trail designer Glenn Jobe grouped the moms together during biathlon practices. They soon became close friends.

In 2018, their Master’s coach and teammate Dave Eastwood came up with the goal of training and competing in the 2020 Winter World Masters Games. Head coach Brian Halligan was happy to help with the training and even created a weekly “Biathlon University” class for further study. The biathlon competition was coveted with only 200 slots available worldwide, but the group was able to secure spots within the frantic 30 minutes before the entire event sold out.

Official trainings held three times a week included roller skiing, over distance hikes, yoga and shooting drills in warmer months. When snow fell, the ski boots came on and early morning laps at Tahoe Donner commenced. Many teammates trained right at TDXC before work. Even on off days, coach Eastwood created a training schedule to stick to.

“The laps around Lions Leap were a similar distance to the laps we were going to race. It’s an incredible amenity,” Lang-Ree remarked. The terrain at Tahoe Donner not only helped enhance their physical shape but helped them become familiar with the style of race they would encounter.

True to their name, balancing biathlons and motherhood meant that not everyone could train consecutively. Each woman dedicated herself whenever she could, and friends and teammates alike supported each other with every glide of the way. “Training together for two years and challenging each other has created tight friendships that we will cherish forever,” Lang-Ree assured.

When coach Halligan was unexpectedly unable to attend the Austrian games, support team Mischel Twining and Lucy Walker stepped up to help where they could. When needed equipment like scopes and ski wax didn’t make it to Austria, teammates pitched in and shared what they had. They also helped each other zero their rife shots for accuracy before the race began. Despite the obstacles, spirits were kept high and excitement was in the air.

Preparation and positivity paid off as their relay team raced on to win gold, besting their competition by more than two minutes. “We were efficient, we worked well as a team and had a great rhythm,” Lang-Ree emphasized.

Not only was there a gold medal-winning relay performance, but Wendt took third place and fellow biathlete Lisa Holan took second in individual racers within their age bracket, respectively. The group was enjoying the scenery after the competition when they got the good news.

“We went sightseeing after our races because we didn’t think we had placed,” explained Wendt. “Our times weren’t the best, but our shooting accuracy bumped us past competitors who took penalties for their shooting.”

The Biathamoms continue to compete in local events, and both women have no intention of slowing down. “It’s great that people TAHOE DONNER NEWS | 13 over 50, or any age, are still getting out there and having fun,” Lang-Ree praised. With true determination and passion, their first race post-victory was the Chuck Lyda Memorial on February 2. The Winter World Masters Games is scheduled to happen every four to five years, and when asked about participation in the next one, both are planning on it.

Training for a worldwide event is no small undertaking, but living at Tahoe Donner allowed Lang-Ree and Wendt to get the most out of their training without traveling far from home. With unique terrain and a welcoming ski community, “nothing can beat it,” Wendt said with a smile.

When talking about why she loves cross country skiing, Lang-Ree shares, “It’s peaceful and relaxes my mind. Nordic skiing is great exercise, is generally safe, and there are no crowds. I just feel happy here.”

Wendt prefers Tahoe Donner Cross Country not only because of the trails but because of the community. “We call the intersection at Moondance Hut ‘Jabber Junction’ because you’ll always run into someone you want to talk to.” Additionally, being able to take her dog along on approved dog trails is a huge bonus that she mentions not many other cross country trails offer.

Not only have Lang-Ree and Wendt been avid Nordic skiers for decades, but their children have found a passion for sports that developed through amenities available at Tahoe Donner. Both have kids who learned to ski and participate in sports through member amenities, and many had jobs growing up – including Wendt herself – working as TD employees.

The crossover between sport and community at Tahoe Donner is not one to be overlooked. Wendt’s favorite Christmas present each year is to gather her family together on the TDXC track for an annual holiday ski. Lang-Ree’s children started sliding on Tahoe Donner snow when they were less than two years old. Both families will cherish these snowy memories throughout their lifetimes. “No matter how you get out,” Lang-Ree says, “every day that you’re on skis is a good day.”

This website uses cookies to improve your experience while you navigate through the website. Out of these cookies, the cookies that are categorized as necessary are stored on your browser as they are essential for the working of basic functionalities of the website. We also use third-party cookies that help us analyze and understand how you use this website. These cookies will be stored in your browser only with your consent. You also have the option to opt-out of these cookies. But opting out of some of these cookies may have an effect on your browsing experience.
Necessary Always Enabled
Necessary cookies are absolutely essential for the website to function properly. This category only includes cookies that ensures basic functionalities and security features of the website. These cookies do not store any personal information.
Non-necessary
Any cookies that may not be particularly necessary for the website to function and is used specifically to collect user personal data via analytics, ads, other embedded contents are termed as non-necessary cookies. It is mandatory to procure user consent prior to running these cookies on your website.
SAVE & ACCEPT